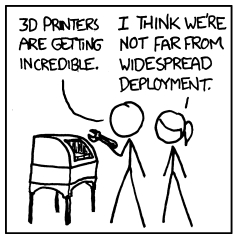 A factory for the kitchen table. New industrial conflicts in the social factory

The presentation develops the notion of the “social factory” through an empirical case study related to the emergence of an open hardware movement. Groups of hobbyists are developing a range of computer-guided machinery tools dedicated for home-use. One of those projects is called Rep-rap. It is an open source 3D printer which “prints” objects in plastics.

The 3D printer can be key to the future development of the open hardware movement since it provides a highly versatile production process. The hobbyists vision is to develop a factory possible to run on top of the kitchen table. The chief, technical principle behind Rep-rap is to guide the movements of a machinery tool with the help of a computer.

It is basically the same principle which underpinned much of the automatisation of the heavy industry in the second half of 20th century. Previously, the movements of the machinery tool had been guided by the human machine operator. To master this process required many years of training and practice. The de facto knowledge monopoly of the workers was the basis of strong and militant trade unionism. Subsequently, the computer guided tool machinery was introduced with the intent to break this strenght. When the same technical principles are now being explored by hobbyist, organised labour has been defeated to the point that the very memory of industrial conflicts has disapeared.

The people developing the open source 3D-printer tend not to place themselves in continuation with this history of labour struggle. Their rationale for inventing the technology is completely different than the old one (i.e. lower cost and fight trade unionism). The concept of the social factory help us to trace the continuity (antagonism, exploitation, struggle) across the discontinuity in the development of this technology.

Johan Söderberg holds a PhD in Science and Technology Studies from University of Gothenburg, Sweden. Currently he is a IFRIS-post-doc researcher at École des Ponts/Paris Est, France. He has published one book about free software development with Routledge, Hacking Capitalism (2007), and a second book about the Swedish pirate movement with the Swedish publisher and think-tank Atlas Förlag, Allt mitt är ditt – Fildelning, Upphovsrätt, Försörjning (2008). His research is published in journals such as Science Technology & Human Values and New Media & Society.